What Is the Difference Between a Battery and an Accumulator?

by Phil Borges // in Articles

Both batteries and accumulators are sources and suppliers of power for devices and appliances. In fact, there are times where they are used interchangeably, but there are a few differences between them that are necessary to know.

The Mrcartool Automotive battery tester is a safe and reliable way to test the health of your car battery. The tester is made of sturdy ABS material, with thick pure copper test wires for accurate results. The load heating simulator is equipped with stainless steel perforated plates, and a fan is installed to enhance heat dissipation. With this tester, you can quickly and easily check the health of your car battery, so you can keep your car running smoothly. 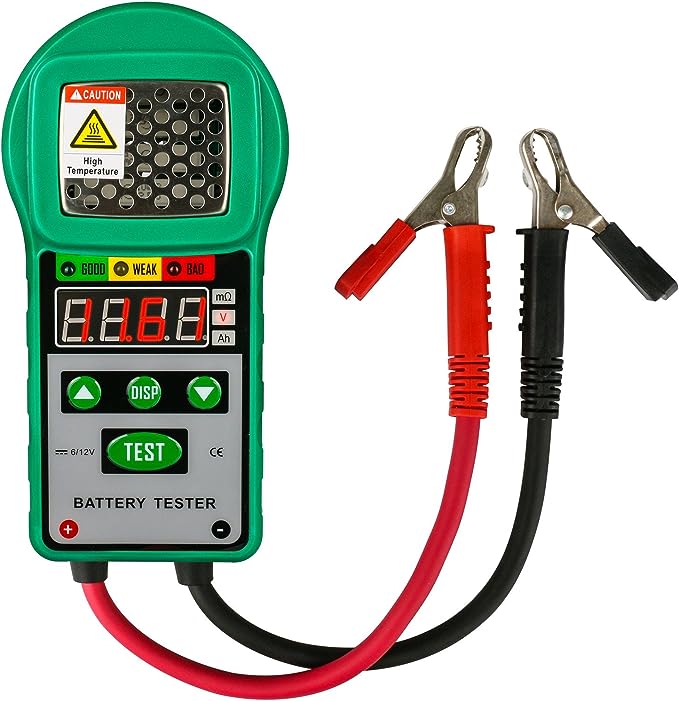 The main difference between a battery and an accumulator is that while batteries can provide a charge, they cannot revive it. Accumulators, on the other hand, can both charge and recharge. In this sense, accumulators are also known as secondary batteries. They also differ in terms of functions, composition, capacity and lifespan.

You can read about these differences in further detail through the next section so that you know which one to opt for when it comes to your own devices. Throughout this article, batteries are used to refer to primary batteries.

Difference Between a Batteries and Accumulators

The following criteria can sum up the differences between batteries and accumulators.

Batteries are those that you can use for a limited time period to provide a charge to your device. Once these batteries run out of charge, however, you will need to replace them with new ones.

You will not be able to revive the charge that was lost. The older battery will now hold no more power to be useful.

On the other hand, an accumulator is one that you can use for an extended period of time since it not only has the ability to provide power to a device but can also revive that power through recharging.

Thus, accumulators can get back their lost voltage while batteries cannot.

Both batteries and accumulators rely on an electrochemical reaction to function. Both of them have positive and negative electrodes and an electrolyte that assists the process involving the flow of ions to create a current.

Since they can be made using different materials, there are differences between them in terms of their voltage, energy density, lifespan and more.

Moreover, for both of them, the chemical energy usually gets converted into electrical energy. For batteries, this is where the process ends until the energy is fully consumed.

For accumulators, however, the electrical energy gets reconverted into chemical energy during the recharging process, allowing it to recover the voltage that was lost during its usage.

Accumulators may also be able to store other forms of energy such as thermal and mechanical if they are used for different functions.

Batteries tend to be commonly used in small and portable devices such as flashlights or torches, remote controllers, wall clocks, watches, small radios and more. After a certain period of time, these batteries need to be replaced for the devices to work well again.

Accumulators tend to be used in a range of devices that can easily be recharged such as smartphones, laptops, cars, steam accumulators, capacitors, electric plants and other wireless devices.

You do not need to replace accumulators after each instance of discharge.

Batteries and accumulators are both made from different materials and compositions that serve to determine the power level, voltage, energy densities and more. These are further involved in the process of converting chemical energy into electrical energy (and back, in the case of accumulators).

Accumulators can be made from lithium-ion, lead-acid, lithium-metal, nickel-cadmium, calcium, magnesium-ion, glass and more, depending on the appliance or device.

These may also have chemical additives that aid the processes while providing necessary resistance to the devices against external conditions.

The capacity for both batteries and accumulators can be measured using ampere-hours (Ah) or milliampere-hours (mAh).

The capacity of accumulators is much higher than that of batteries due to the fact that they can last for much longer than batteries. This capacity tends to depend on several factors such as usage, maintenance, external conditions, charging practices and more.

The requirements from accumulators are also much higher as compared to batteries, which is why the capacity needs to match this requirement.

Since batteries cannot recharge once they run out of charge, they have a limited lifespan that tends to last for a few months until you need to replace them.

Accumulators tend to have a lifespan of several years due to their recharging ability, going up to hundreds or thousands of charging cycles depending on their composition.

Over time, however, accumulators also tend to lose small amounts of their capacity and efficiency at a natural self-discharge rate. This rate can quicken if the conditions around the accumulator are unsuitable.

It is, therefore, important to keep accumulators in good condition in terms of temperature, humidity, storage, physical harm and more. This also applies to batteries.

Batteries cannot be reused and therefore, must be disposed of after they run out of their capacity and power. On the other hand, accumulators last for a long time and do not need to be continuously disposed of.

Many batteries tend to end up in landfills, but efforts are being made to use other treatment and disposal methods to recycle them. Accumulators fare better in this case since they are only thrown away once in a few years.

Batteries tend to be much cheaper in terms of their cost of purchase whereas accumulators are a bit more expensive.

However, the long-term costs of batteries are higher since you need to keep buying them regularly to power your devices and appliances. Accumulators, on the other hand, help you save several costs as they last for a long time.

Batteries tend to have metals, chemicals and other substances that are toxic to the environment. Since these batteries generally end up in landfills, they can release such toxic elements into the atmosphere and the ground, leading to pollution. In comparison, the power that they provide while in use is minor.

Accumulators provide a lot of power and can be used for several years with frequent charging, thereby significantly reducing their contribution to environmental pollution.

However, there are now several regulations across the world to control the presence of toxic elements in batteries and accumulators.

What is accumulator in electric car?

Electric cars make use of accumulators in the form of rechargeable batteries. Most electric cars now use lithium-ion batteries due to their durability, quality and high energy density.

These batteries can be recharged periodically to power the cars. Since they are usually kept in the form of a container, they can stay protected. With regular maintenance, they can last for several years at a time.

Cells are some of the smallest components of batteries (or even accumulators). They tend to comprise the positive and negative electrodes, the electrolyte and a separator.

Depending on the composition of these elements, the cell can have a certain capacity level that can then provide power or charge to a device. With external conditions and maintenance, this capacity can then decrease or be maintained well based on its natural self-discharge rate.

Why are secondary cells called accumulators?

Secondary cells are called accumulators since these cells have the ability to revive and restore the charge or voltage that was lost during the previous use of the cell or battery in a device.

This allows them to be used for several years at a time with minor depletion of efficiency over time unless the conditions are unfavorable.

BMS refers to a battery management system that is responsible for the entire efficient functioning of rechargeable batteries or accumulators. This includes tracking, monitoring and applying relevant information related to the voltage, resistance and more.

If there are any external conditions that can lead to overcharging, overheating or other accidents, then those are effectively controlled to prevent major issues.

There are several components that form a part of this system that include regulators, circuits, boards, controllers and more, creating a uniform and balanced system.

Will an Anti-Theft Light Drain Battery?

C Vs D Batteries – What Is The Difference

Why Does My Key Fob Stop Working After Replacing Battery

Why is AGM battery not holding a charge?

What is an OEM Battery?

Can You Use A Battery Powered Lawn Mower On Wet Grass?

What Does Battery Saver Active Mean On Chevy Impala

What Are 96R Battery Equivalents?

How to put batteries in flashlight?

What kind of battery does the Weight Watchers scale use?

What Happens If You Charge A Non Rechargeable Battery

How to replace your LiftMaster keypad battery?

How Often To Replace Car Battery

What does the battery with the exclamation mark mean?

Why does battery voltage drop under load?

How long does the Apple Pencil battery last?

How Long Does It Take To Charge A Car Battery