Why Is My Smoke Detector Still Beeping With New Battery?

by Phil Borges // in Smoke Detector

Smoke detectors are designed so that they emit a beeping sound to draw your attention to a problem. At times, the beeping noise is not from a fire, but from the device prompting you to change the battery. Yet, why does the smoke detector sometimes still make the chirping sound, even with a new battery?

Usually, if you find that your smoke detector is making a chirping sound even with a new battery, it is because it needs to be reset. The error code that was triggered in the device’s internal processor when the battery was low needs to be manually overwritten for the beeping to stop.

This First Alert battery-operated smoke and carbon monoxide alarm provides continuous monitoring of CO levels, even if there's a power failure. Features an electrochemical carbon monoxide sensing technology as well as a photoelectric sensor that detects the larger particles of a smoldering fire. Indicator lights on the face of the unit display the presence of smoke or carbon monoxide, while an 85-decibel siren provides a clear, loud warning upon detection. Battery-operated unit installs quickly and easily without an electrician. Low battery signal mute, quiet-alert feature, and 10-year limited warranty. 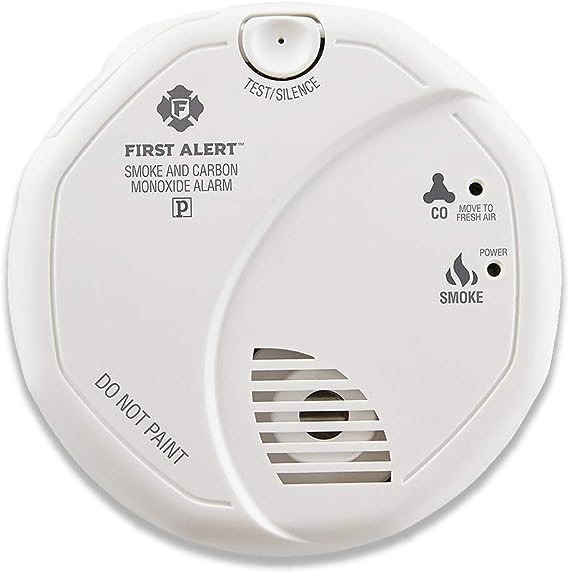 The incessant chirping sound can certainly be frustrating. But before you decide to replace the smoke detector altogether (or worse, smash the device out of frustration), simply try resetting it. In the following sections, you can find out how:

Why Is My Smoke Detector Chirping with New Batteries?

To explain further, most homes and residential complexes have smoke detectors that work on low-voltage electrical wiring and require a battery backup. These smoke detectors contain internal processors that send out codes in case something out of the ordinary is detected, whether smoke or even a pair of batteries that require changing.

Remember that a smoke detector is an extremely useful and important device to have in any home. But for it to do its job properly and effectively, the device needs to be up to date and have the right source of power. It is important to replace the batteries of your smoke detector before they run out. And if the chirping of the low battery signal does not stop despite the batteries being changed, then simply try resetting the device.

How to Reset the Smoke Detector?

Resetting a smoke detector may sound like a complicated and technical task, but it is actually quite simple to do. To reset the smoke detector, you must follow these steps:

Once you have done this, typically the smoke detector will chirp again, but only once. The incessant beeping that you were hearing before should stop once you have reset the device. If the chirping continues despite these steps, it may be worth giving the manufacturers a call about technical support.

What Else Could the Beeping Sound Mean?

If the beeping sound is not from a low battery, what could be the other reasons for your smoke detector’s incessant chirping? If your smoke detector does not need to be reset after a battery change, nor is there a visible fire in the vicinity, then the following could be some of the possible reasons that the smoke alarm is chirping:

The smoke detector needs to be replaced or has expired. The beeping could be an indication that its time is up.

There is a build-up of dust or insects near the sensor of the smoke detector, which is causing it to be triggered.

The most common cause for the smoke detector to be beeping without any apparent reason is steam or humidity from the kitchen that the device mistakes to be smoke from a fire.

Smoke from incense sticks or a mosquito coil nearby may be triggering smoke alarms.

Ensure that you turn on the exhaust or the chimney in the kitchen if you are grilling something or if you know there may be a lot of steam or smoke from cooking. If you like to use incense around the house, try to do it next to an open window or at least keep it away from the smoke detector’s sensor.

Should You Invest In a Smoke Detector That Comes without the Chirping Feature?

Technology has advanced enough for you to find a smoke detector that comes without this incessant chirping sound to indicate low battery or some other defect. However, the very point of a smoke detector is that you have a warning device that will protect you in the event of a mishap or accident, letting you know that you need to take immediate action to secure yourself and your loved ones.

While the beeping sound from a smoke detector to let you know to change the battery is not the same as a warning about a fire. But only if your smoke detector is equipped with a source of power will it be able to warn you in case of danger.

It is important for you to hear all the sounds of your smoke detector, whether the actual warning signs about smoke or the chirping sound nudging you to take a look at whatever may be the issue with the smoke detector.

It may be tempting to invest in a quieter smoke detector, but that defeats the purpose of having one installed in the first place. Sure, you can test the volume and set it to one that you can hear even when you are at a distance but which does not irritate your sensitive ears. But it would be inadvisable to install a smoke detector without the chirping sound.

How Long Will a Smoke Detector Chirp before the Battery Dies?

If the beeping sound is from a low battery, then a smoke detector will likely keep chirping intermittently until the battery dies out. How long this takes may depend on the make of the smoke detector. In some cases, it may be weeks, in others, it may be months.

How Do You Get a Smoke Alarm to Stop Chirping Without a Battery?

If you notice that your smoke detector is making chirping noises despite taking the battery out, it is likely because it depends on another source of power. If even after the battery has died or if you have removed the batteries, the smoke detector is still connected to a power circuit, it will continue to chirp until you put in new batteries or you reset the device.

How Often Should You Change the Batteries?

You can prevent this annoying chirping noise emitting from your smoke detector if you simply replace the batteries before they die out. Typically, six months or so should do the trick. If you take care of the problem preemptively, then there is no problem to speak of!

When Should You Replace a Smoke Detector?

Sometimes, the battery is not the only problem and the smoke detector itself needs replacing. If your smoke detector is close to a decade old or even older, it may be worth switching it out for a new one instead of spending your energy changing the battery and resetting the device. You will be able to get the latest, most updated model, and chances are you will not have to deal with the chirping noises with a new device.

Why Is My Smoke Detector Still Beeping With New Battery?